Between 8 August and 3 September, the Lion Salt Works Museum  will host a visual delight when a new exhibition of 14 colourful 1930’s-style railway posters promoting the many attractions of Mid Cheshire Railway Line is unveiled for the first time.

Produced by the Mid Cheshire Community Rail Partnership, with support from the Saltscape Landscape Partnership,  and designed by artist Nicky Thompson of Chester-based Lemondrop Creative, the posters are intended to evoke the Golden Age of British travel and encourage holiday-makers in the North-West and beyond to embrace the spirit of adventure and explore the sites of the region by rail. There is no charge to view the exhibition and regular tours will take place. On Sunday 6 August at 2.30pm there will be a public preview and talk about the artistic inspiration for these posters at the Museum. For more information, contact the Lion Salt Works Museum on 01606 275040.

The railway posters characterised by blocky vibrant colours, feature both general scenes of cities such as Stockport, Manchester, Chester and Altrincham. In addition, they capture interesting sites near rail stops, for instance, Lostock Gralam features the Lion Salt Works Museum and Northwich’s stop is illustrated by the impressive ‘Cathedral of the Canals’, the Anderton Boat Lift. Other posters include: Delamere, Knutsford, Hale and Chester Zoo.

Cllr Louise Gittins, Cabinet Member for Communities and Wellbeing, Cheshire West and Chester Council, said: “The railway posters of the 1930s hailed a new era of train travel and this imaginative campaign featuring fourteen railway stops on the Mid-Cheshire Railway line hopes to trigger a similar reaction. I think this is a marvellous initiative and an excellent way of showcasing the beautiful attractions of the region. Not only can visitors view the exhibition free-of-charge at the Lion Salt Works Museum, but they can also buy their own copies of the posters and postcards. They make an excellent present and I am sure there will be high demand for them.”

Sally Buttifant, Mid-Cheshire Communitu Rail Partnership Officer, said: “It is easy when you’re on a train not to appreciate what lies just beyond the station. We hope this poster campaign will open people’s eyes and encourage them to step off the train and explore – just like the visitors did in the 1930s. Each station will feature its bright new poster and we hope commuters and rail goers will be interested and pleased by these colourful additions to the stations. To encourage interest in the free exhibition at the award-winning Lion Salt Works Museum, postcards of the posters will also be handed out at stations.”

Artist Nicky Thompson who owns and manages Chester design studio Lemondrop Creative said: The posters draw on the work of Frank Henry Mason, one of the most influential poster designers of this era. In their day, these posters with their strikingly bold colours and experimental flat design were quite different and new. What is unarguable is that they were highly effective in creating an aspirational sense of adventure that drew city-dwellers to explore the countryside. I’m an Ellesmere Port lad, and as a Cheshire resident, it has been a total pleasure to produce the artwork for these posters. I hope everyone enjoys them.” 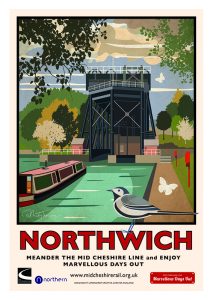 The Lion Salt Works Museum has won eight awards since re-opening in June 2015. On 30 June it was named ‘Museum of the Year’ by Northern Soul, a website dedicated to Northern culture in all its forms. In 2016, it won the National Lottery’s ‘Heritage Project 2016’ as well as well as two national restoration awards.