As well as time-travelling and stone carving, we’ll be doing traditional canalware painting at this year’s Middlewich Folk and Boat Festival.  You can practise on a paper plate first, and then try your hand at decorating some stoneware with Jane Marshall. 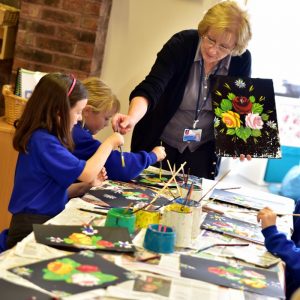 Jane , from Day Star Theatre,  has been running workshops for adults and schools on behalf of the Saltscape Landscape Partnership for the last two and a half years teaching people the basics of the Roses and Castles motifs which traditionally s covered virtually everything in or on the narrowboat – including the vessel itself. The drinking can, the horse’s harness, doors, fitted furniture, lamps, anything and everything was decorated with bright and cheerful chocolate-box designs.

Roses & Castles movement took root and flourished at a time when other traditional crafts and trades were fading in the light of the industrial revolution. In fact, Roses & Castles became so intrinsic to the boating environment that it is still going strong today.

No-one knows exactly where the Roses & Castles movement originated from. There are obvious links with gypsy culture and their elaborately painted caravans, but historians have also identified similarities with folk art from Germany, Holland and even Asia. Wherever it came from, the reason for its popularity and growth is certainly tied to the limited size of the boat cabin, the pride of the boat people and the competition between the canals and the railways.

Visit the Canal and Rivers Trust website for more information on Roses and Castles Traditional Canalware painting and folk art, and come along to our stall at Middlewich Folk and Boat Festival to have a go yourself. 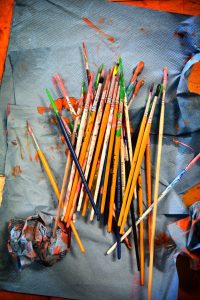