Fiona Megarrell is working with us in the Groundwork Offices here in Northwich.  Here’s her account of her experiences working with one of our partners, RECORD LRC. 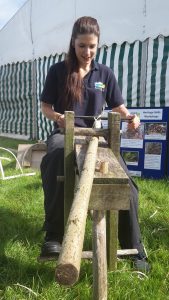 “I have been the Saltscape Community Engagement Trainee for about 6 months now where I’ve been learning what a Landscape Partnership Scheme
is and why it’s so important they exist.

The idea behind Saltscape is to work with local organisations such as Cheshire Wildlife Trust, Canal and River Trust and of course RECORD (the local environmental records centre based at Chester Zoo), amongst others to collaborate on protecting and enhancing the landscape that has been so hugely defined by the salt industry. Community engagement with this uniquely crafted area is a central aspect and encouraging the public to use and benefit from organisations such as RECORD enables them to understand the true significance of this part of Cheshire.

So far within my trainee-ship I have been lucky enough to be heavily involved with the relationship between Saltscape and RECORD. Altogether there have been six wildlife training and recording sessions with a handful of extra general recording days exploring the Saltscape. Recording our wildlife gives an important insight into animal, plant and fungi behaviour as well as the geology of the area which is particularly important for Cheshire. There are large areas where salt mining was extensive and eventually led to land subsidence when the mines collapsed. These vast pits were then filled with lime waste resulting in us gaining the perfect habitat for rare species such as the dingy skipper butterfly.

As a beginner, I felt like the more I learnt the less I knew! However, with a little encouragement from the RECORD team and volunteers I have gradually been building my basic knowledge which started with accompanying them on one of the Saltscape recording days and observing how they went about identifying species. Sadly I’ve realised I will never know everything off by heart! Even the pros have their books out to join the dots. But slowly, I have learnt where to look and why. I now know to look at the markings on the thorax of a dragonfly and to note the spacing of the gills on a fungi, to notice the flight pattern of the bird flying overhead and observe whether the leaves on a tree are staggered or adjacent. Knowing these major tell-tale signs has been paramount to being able to use field guides properly and I’ve even been passing my knowledge on to others!”