A new trail linking some of the most important sites in Cheshire’s Salt history and its surrounding landscape was officially opened on 9th June by Alan Redley, Chair of Friends of Anderton and Marbury (FoAM) and John Boundy of Inovyn. 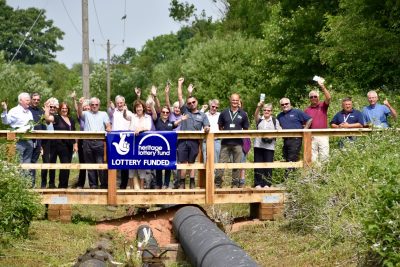 The Saltscape Trail links Anderton Boat Lift and Lion Salt Works passing through the beautiful surroundings of Northwich Woodlands.  Visitors can choose the Orchid trail or the Dragonfly trail (3 miles each), both of which link existing and upgraded footpaths to create a full figure-of-eight walk.

Alan Redley said : ‘We hope the new trails will give people, especially families,  the opportunity to explore the woodlands with greater confidence thanks to new waymarkers and fingerposts, and a greater awareness of what was here in the past thanks to the new interpretation panels.  The new panels explain the link between nature and the chemical industry that was brought here because of salt.  It’s incredible just how many species thrive here in spite of, and in some cases, because of waste left behind by the industry.” 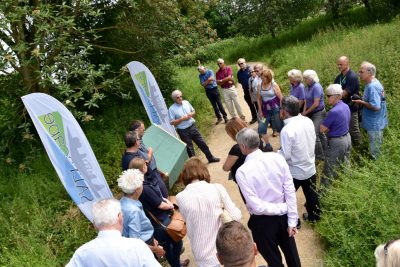 The trail, made possible thanks to funding from the National Lottery’s Heritage Lottery fund, is part of a programme of improvements under the Saltscape Landscape Partnership.  Led by Groundwork Cheshire, Lancashire and Merseyside, Saltscape brings together a number of different national and local organisations to upgrade and highlight buildings, projects and landscape linked to salt industry and its legacy in the Weaver valley.

Rachael Maskill from Saltscape said, “The opening trail is an important milestone for the Saltscape Partnership.  It encapsulates what we are trying to achieve in all of our projects: namely to improve people’s access to the salt landscape of the Weaver Valley and understand more about how it has been shaped.” 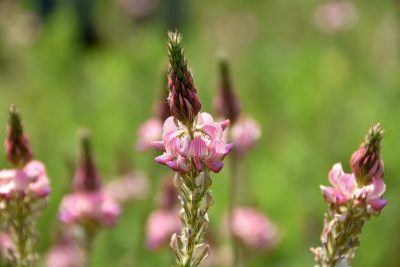 The work has been carried out by contractors and by volunteers from FoAM working closely with Dave James, Cheshire West and Chester Ranger, and with chemical company, Inovyn, whose pipelines are crossed by a new footbridge which forms part of the trail just off Ollershaw Lane.

If you’d like to try out the trail you will be able to pick up a leaflet with the full trail map from the Ranger’s Cabin at Marbury Country Park or from the Lion Salt Works Museum.