Over the three years of its life, the Saltscape Landscape Partnership will support a number of trainee roles.  These traineeships give the post-holder  the opportunity to gain additional skills and experience in a range of sectors associated with the varied and complex work of a landscape partnership scheme.

Over the next few weeks we’ll be hearing from our Ruby Merriman,  a Saltscape trainee working with Cheshire Wildlife Trust .  She’ll be telling us all about the many species of the Saltscape. This week, she takes a look at plants. 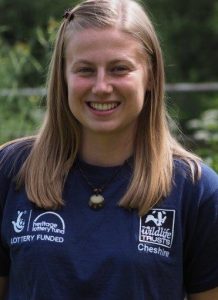 “During my first 4 months as a Saltscape trainee I have had the opportunity to visit and survey a lot of grassland sites, and amazingly all in beautiful sunny weather! I’ve learnt a tonne of new species, especially plants, and I have picked up on a lot of reoccurring species across the Saltscape area. So, for this article I thought it’d be good to look back on some of my favourite species I’ve encountered throughout the summer.

This is one of the first wetland plants I learned whilst surveying, mostly due to the unforgettable smell of soggy socks when you rub your hands on its leaves- a great identification feature! Other identification features include lovely purple flowers, a square stem which is characteristic of the mint family, and serrated leaves in opposite pairs along the stem. I’ve found marsh woundwort on most sites, especially on damp grasslands, with the buzz of common carder bees never too far away from the delicious nectar it provides!

This has to be my favourite grass from the few I’ve learnt so far. The tiny purple flowers going up the stem and to one side give the grass a ‘pipe cleaner look’. Crested dogs tail is often found on species rich grasslands, but it can also tolerate more nutrient rich soils, making it a common and widespread grass. It was historically used for making bonnets (a possible Saltscape heritage skills event there?) and is a popular food plant for skipper and brown butterflies.

One of the most common wildflowers encountered on my surveys, this yellow flower is a member of the pea family. You will often spot is scrambling up other plants to get to the sunlight, especially in damper areas, and the leaves have a lovely ‘mint green’ like colour to them. Having plenty of meadow vetchling on site certainly livens up the colour of the landscape and the bee activity! (photo shows a skipper)

Also known as ‘eggs and bacon’ for the yellow flowers (egg yolk) and red fringes you can get on some flowers (bacon). This is a very common flower that you can come across in local parks, as well as species rich grassland. The flower is conveniently named after its appearance, with the seed pods resembling a bird’s foot. 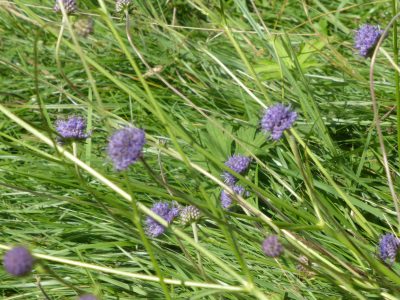 A very nice plant to find, as devil’s-bit scabious is a great indicator of good quality neutral grassland. It’s also a great source of food for butterflies and bees, and has fortunately cropped up on a couple of our project sites!

The name ‘scabious’ comes from the condition ‘scabies’ – one of the many illnesses that ‘scabious’ flowers were supposed to help cure. According to one myth, the Devil grew angry about these cures and tried to eliminate them by biting the roots off. This is why it has short and stubby roots and is called ‘Devil’s-bit’ scabious!

I know it’s not the most glamorous plant, but bramble can actually play an important part in grassland habitats as long as it’s maintained. The cover and protection bramble offers is great for breeding birds including warblers, and bramble bushes are also a popular place for badgers to make their setts. And of course don’t forget the delicious blackberries it produces in autumn for people and wildlife to enjoy!