Another important project for the Saltscape Landscape Partnership gets underway!

A 150-year-old swing foot bridge over Vale Royal Locks on the River Weaver in Cheshire is to get a new lease of life – thanks to a major renovation project.

The Canal & River Trust, the charity which cares for 2,000 miles of waterways including the River Weaver Navigation, has removed the bridge and transported it on a low loader to a fabrication yard in Yorkshire for major repair and restoration works.

In place of the Grade 2- listed, metal swing bridge will be a temporary footbridge, allowing walkers to continue to cross the locks as part of a popular river walk, just south of the landmark A556 Blue Bridge, near Northwich.

The project has been funded jointly by the Trust and the National Lottery’s Heritage Lottery Fund through the Saltscape Landscape Partnership.

David Thorne, project manager with the Canal & River Trust, worked with contractors Kier to crane out the bridge onto a barge using a bespoke gantry, float it 100 metres down-river and then crane it from the river on to an HGV low loader by the Blue Bridge for the start of its road journey across the Pennines to a fabrication yard in Doncaster.

“This has been a complex operation to remove the bridge from a fairly inaccessible stretch of river. We have had to perform two delicate lifts of this 8.5 tonne structure which have gone like clockwork thanks to a superb team effort on site,” he said.” 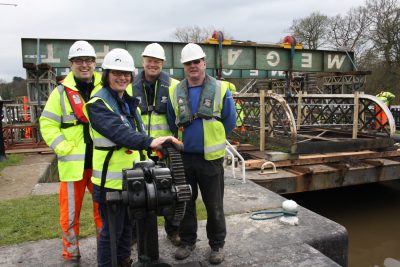 “This is one of the iconic original bridges installed when the River Weaver was converted into a navigation for boats carrying salt and other goods in the mid19th century.

“The renovation work involves cleaning, shot-blasting and priming to prevent further corrosion. The bridge will then be stored for just over 12 months until the start of the new financial year in 2017. Sadly we have had to delay the completion works due to extensive damage to the canal network caused by the freak January floods. Funds have had to be diverted this year to cover vital emergency repairs in other areas.

“We hope to begin the second phase of the renovation works in spring 2017 which will include extensive repairs to the structure and re-painting before the bridge is re-installed a few months later.”

Kate Lynch, Canal & River Trust local heritage adviser, said: “Lattice girder bridges like this one are an important part of the living and working heritage of the Weaver Navigation. Together with the locks at Vale Royal, they reflect the size and type of vessels that once used the river.

“Thanks to funding support, careful repairs will allow the 1865 bridge to continue to operate alongside the other three at the site and to continue to be enjoyed by visitors in the future.”

Rachael Maskill Manager of the Saltscape Landscape Partnership said: “This work allows us to conserve a crucial piece of waterway history whilst enhancing access for people who want to get out and enjoy the wonderful salt landscape on their doorstep”