This month at the Cheshire Wildlife Trust (CWT) I’ve been getting involved with a project to improve the Weaver Valley for the benefit of our much-loved water voles. This national treasure was immortalised in the classic children’s novel The Wind in the Willows as the character ‘Ratty’. In the past, when population numbers were much higher, it was not uncommon to hear the characteristic ‘plop’ sound of a vole jumping into the water. Sadly, today this adorable riverside mammal is under threat from a number of pressures which has led to its drastic decline.

The Water Vole is Britain’s fastest declining wild mammal and has disappeared from many parts of the country where it was once common. One big reason why water voles are struggling is as a result of habitat loss, but they are also suffering particularly from predation by the introduced American Mink.

So how are we going to give Ratty a helping hand?

CWT has run water vole projects in the past along various watercourses in Cheshire, but as part of the Saltscape project, we are now focusing our efforts on the River Weaver and Weaver Navigation. Currently, the water vole population is good around the Frodsham Marshes, but then reduces upstream and communities are much sparser. Therefore we want to increase the amount of suitable habitat and connect areas of good habitat by improving the sections in between, in conjunction with mink control to reduce predation pressures.

Last month, we held a training day in Frodsham for volunteers to learn how to conduct habitat assessments. Volunteers will undertake surveys and then feedback data to CWT which will inform our management plans. One way to improve a stretch riverside habitat is to place coir rolls behind wooden stakes along the bank (pictured here). Coir rolls are hessian bags filled with coconut fibres which reduce bank erosion by dissipating wave energy from passing boats; they can also be seeded with marginal plants, which provide further shelter and a food resource for water voles.

Now we need to get our volunteers out surveying and then we can decide where the habitat management works will take place, to make it that bit easier for our furry friends to colonise new areas of the Weaver Valley. Then perhaps the sound of a water vole jumping into the water, or even a sighting, may be a more common experience once again for people to enjoy along our waterways. 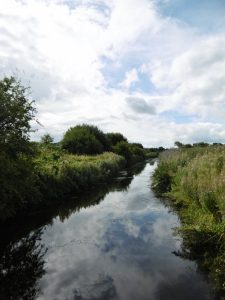 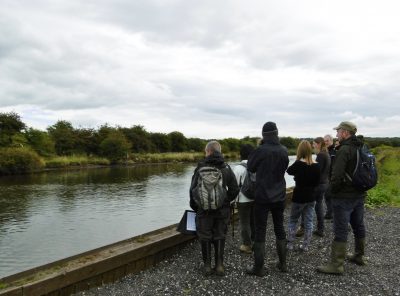